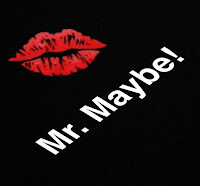 I met Mr. Maybe almost a year ago, but was unwilling to notice him.  When I first saw him, I thought he was a silly person because all he did was clown around.   The more we hung around each other the more we would talk.  I actually liked when he was around. My nights weren’t boring.

I didn’t realize that he like me until we were at a function and someone else brought it to my attention.  The person said, “I think Mr. M like you, he is coming around more and he ask questions about you”.  After that conservation, I started noticing he was doing what she said. He was coming around more and would hang out with me and hold conversations with me.

He had a picture of my daughter that I wanted. He said I could either send it to myself or I could air drop it.  I just went on ahead and text it to myself because that was less complicated.  I wasn’t really trying to give him my phone number and he really wasn’t asking for it, either. Honestly, I wasn’t really feeling him like that at the time. Chuckling as I type, and that is how we exchanged phone numbers.

He didn’t use my phone number until around Christmas time.  He texted me to see if we had anything going on with the family during the holidays.  I replied but I kept it to the question at hand.  Now, looking back he was making the initial contact.

He later used my number to just say hi.  I found that a little odd but I obliged with a return message.  At this point, I was willing to see where this would go.  Whelp, to my surprise we were engaged into a full blown conservation.  We have been texting ever since.

He asked me if I would like to meet him one night to shoot pool or just to get a drink, a date? Of course, I said yes, even though everyone knows I can’t shoot pool. He was peaking my interest by this time.  He asked me to meet him at Walmart, I wasn't quite sure why.  When I got there he suggest that he would drive. I hopped my tale in that nice comfortable truck and let him chauffeur me around.

When we got to the place he fussed at me because I was reaching to open the truck door and he yelled at me for trying to touch the bar door, and I thought chivalry was dead. Boy, was I wrong.  We had a lovely time even though we didn’t shoot pool.  Just talking and shooting the shit turned out to be something nice.  I realized that we are much alike.  He’s not all serious and neither am I.  We ended that night with a hug.

We met again at a club. I was out with my SIL when he walked in.  I don’t know how to swing out so he asked me if it was ok if he dance with other people? He asked me! I watched that man dance and Lord Have Mercy! That man is FINE!!!! That’s when I really noticed how sexy and handsome this man really is. How could this sexy, handsome man be single and no one has snatched him up?

So stay tuned to see if Mr. M will keep moving down this river of uncertainty. Will he sink or swim, that is the question?
Posted by Jeigh at 3:06 PM