My coworker and I were asking each other if we had watch our shows, Dallas and Kim & Kourtney Takes Miami (KKTM).  I told her that I was able to watch some of Dallas but did get a chance to catch up on all of the episodes of KKTM. She then told me she had missed them because her beau was pouting because he wasn’t getting enough attention.

She went on to tell me that they are constantly fighting over the remote.  She said he even clutches it in a death grip when he is asleep. I laughed for a second and realized that EP does the same.

I began to enlighten her on my tug-a-war with EP and the remote.  I told her that I get to watch Sports Center or any other sports stations when we are together. If I try and go in the other room, then he pouts.  I usually have to go digging for the remote when he falls asleep.  But he fixed that by turning the TV off before he goes to sleep. 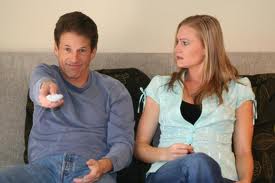 I had to make her laugh about the other day. EP was outside talking to a neighbor and I was inside watching the end of Real Housewives of Atlanta.  He walked in to get a schedule to show his neighbor. I swear he saw me watching TV and he didn’t like it.  He said “hey, come outside with me!” I did as he asked and went outside and they were discussing the Hawks, Braves, and NBA teams match ups.  I stayed outside for about five minutes then tried to sneak back in the house, when he said “Babe, what time does the game start tonight?”  I answered then turned and dashed towards the door. As soon as my hand touched the knob, he called out to me again, “Bae, Mr. So and So wants to know how you prepare gumbo.”  I bit down turned around with a smirk and walked back to them and started a convo with them about preparing gumbo. 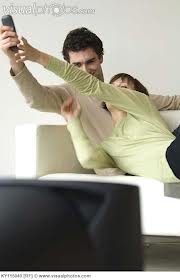 Before walking off this time, I said, “excuse me, I have to go to the restroom.”  Yes, I was in the clear, so I thought. I went inside, and sat my ass down in the chair and who walks in the door, EP, dammit!  He didn’t say anything, in which I was entirely shocked, and walked right passed me. He went in the kitchen, walked into the bathroom and then came back where I was and said, “Get dressed, I want to run by the mall to get something.”  I get up and proceeded to get dressed.  I walked in the bathroom and something hit me that I wanted to ask him about Mr. So and So, and guess what this dude was doing, YEP you guessed it. He was sitting down on his ass watching Sports Center! I grabbed the remote and ran with it! I told him if I can’t sit down and watch TV you will not either!

My coworker said, that we need to put her beau and EP in a support group for guys with remote control issues, where do I sign him up?  I totally agree with her, looking for one, kmsl!  I will have to come up with a clever way to get the darn remote because, this is madness!

Hint: Record all of your favorite shows (if you don't have a DVR you better get one). So, if he is there, you can give HIM your undivided attention and you can watch your shows later, when he is away!

Ladies, do your men control the remote?  Men, does your lady have limited access to the television?  I want to hear your thoughts and stories.