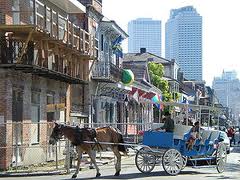 EP and I have finally spent some real time together, since meeting.  We had an awesome time!  He flew into the city early, so we had time to go to one of my favorite hangout spots in the city.  I took him to Port of Call on Esplanade.  He was able to partake in the hamburger with the loaded baked potato.  He loved the atmosphere and said that he could come back to a place like this.

After eating and having a few drinks at Port of Call, we ventured over to the Superdome for the Hornets vs. Raptures game.  It was really interesting that we decided to go to this game because he is a Hawks fan and of course I am a Lakers fan!  But really the cost of the tickets was hard to pass up on.  The game ended with a Hornets lost in overtime, but this game was truly exciting.

Once the game concluded, we took a stroll down Bourbon to find a place to dance and have some drinks.  We ended up in Channing Tatum’s club/restaurant, Saints & Sinners.  I was truly impressed with the décor and the layout of the place.  The dance floor was a little small for my liking, but the place was on point.  Did I mention there is a stripper pole in the center of the dance floor, giving a side eye!  The music was slamming which caused us to stay there until wee hours in the morning.

The next afternoon, we woke and starvation stared to settle in.  I insisted that we go to a local breakfast spot, Another Broken Egg, to get a fast bit to eat.   He had an omelet and I had eggs with all the trimmings.  Once again, he was impressed with my place of choice.

We were suppose to pass by my friend's house, but being that it was late, we went on to a  bball game that one of his friends invited us to.   When got to the game and he was astonished that I knew what I was talking about during the game; hey girls can be sports fans too!  The team that we went to watch got blown out by 50 pts.

We moved our party to Chili’s.  Come on now, Chili’s have the best 2 for 1 special around!  We sat at the bar and ordered food.  We chatted about life and how he was enjoying the Louisiana culture.  His friend was working on him regarding moving to my fine state, giving a side eye, again!!

We ended our night in a local daiquiri shop; Endzone!  I love this place because there is NO smoking allowed and it caters to older crowds.  He was able to hear local music as well as hear his favorite “bounce” music.  He gave this place a gold star and said he will definite make this a place to come back to.  I had to drag his butt out of this place because getting up early isn’t a strong attribute of ours.  His plane was scheduled to leave at 10 am and it was 3:30 am.

After returning to his home, he called and said he told his brother and mother about the wonderful time he had.  He invited his brother to tag along with him when he returns.  No plans have been made for me to visit him, but he did hint around it a couple of times.

All and all, it was a quick visit but we both had fun.  With that being said, we will have to wait and see if the “Living the Single Life” title gets changed.  But for right now, he is still swimming in that uncharted river and I am still drifting!
Posted by Jeigh at 2:57 PM