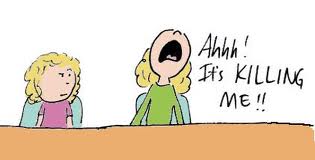 I made a horrible mistake this past weekend.  I gave my phone number to a guy and today, I am paying a huge cost.

I met this nice looking gentleman that I thought had great qualities as someone I could get to know more about.  He and I were engaged in conversation for at least an hour. We talked about family, sports, our likes and dislikes as well as predictions for that night’s game.  We exchanged phone numbers and said we would contact one another.

Mr. Gnat (because I just want to swat him) called me later that day about five times.  I didn’t know I had received all of these phone calls until after I got into an area that had better reception.   When I finally was able to return his phone call, he didn’t answer.  I left a voicemail explaining the situation and let him know that I wasn’t trying to ignore him.  Why didn’t I just leave it at THAT?????


Well, he returned my phone call. The call started off a bit like the previous discussion when we meet.  Then he dropped his facade and the real person came out!  OMG, this guy begins to tell me that I need to be pulling for his college and pro teams.  I need to have a face to face discussion with him on why he believes that living in another city is better than living here! The one that took it home, was when he told me that I had to accept his date request to a place I totally dislike!  No, not Golden Corral!

At this point, I begin to disconnect myself from the conversation.  I told him that I had to get up very early in the morning and I would talk with him later.  Mr. Gnat told me, I needed to stay up to watch the Yankees play so I could tell him what the score was when he called back in thirty minutes, REALLY???  With all the strength I could muster, I told him that I was GOING to sleep and I will chat with him at a later time! I also told him, if he calls me back, I will not answer, because I will be asleep!!  Oh, he did call back, two more times!!!!  Right then, I knew I had made a horrible mistake by giving this gnat my phone number.

Therefore, I saved Mr. Gnat’s number under “Do Not Answer” in my phone.  A wise friend suggested an iPhone app that would send unwanted calls directly to voicemail.  Without hesitation, I downloaded the app and added “Do Not Answer” to the list. Whew!

I have learned an important lesson here, I will not give out my phone number again, maybe my email, lol!  But seriously, how do you avoid a situation like this?  How do you avoid the Weirdoes?

Have you ever given out your number and wished you hadn’t?  Tell me your story!