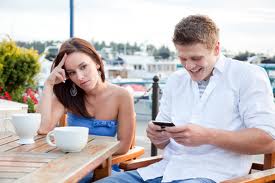 I went on a date with this gentlemen and I was finally having a good time.  We were at a local hang out spot that we both picked. Every now and then he would check his phone; at this point it didn’t bother me, because I know he has kids.  It became a problem when in mid conversation he picked up his phone to answer a text message. If you could have seen the look on my face, “priceless” wasn’t even a close enough description.  Dude, did you really just do me like the guy in the ESPN commercial?

From this point on, he became drawn to his phone.  He began to have a full blown conversation with this person via text message.  He would put the phone down and when the phone would blink he would pick up the phone and respond. So now; I am certain that this cannot be his kids.  I got annoyed and suggested, “Can you tell her that you will get with her after dinner or maybe tomorrow”?  I wanted him to know and understand that he was being down right rude!  He looked at me, chuckled and said, “Oh this is my boy”!  Fool, who do you think I am Wilma Foo Foo? Like hell, that is your boy!

I felt disrespected and this was unacceptable!  He didn’t even have enough decently not to entertain another conversation, whether it was his Boy or not; which it wasn’t!   He showed me that he was way more interested in the phone messages then this classy lady sitting across from him! WTH!!!

I am not saying they can’t check their phones while being on a date, but do it with some respect.  Guy/Girls, if you are trying to get to know someone, that isn’t the way to go.  Don’t hold an entire conversation with a person via text message when you are with someone else.

Needless to say, that I will not accompany this gentlemen anywhere again.  From now on, when I go on a date, I will have cab fare or a friend on stand-by!
Posted by Jeigh at 5:00 PM