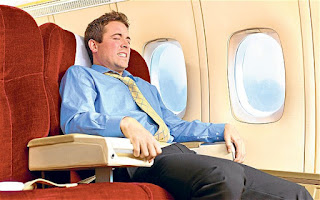 I have been traveling for my job for the last seven years, but up until recently, I have never been extremely entertained on an airplane.

I shared with you that my son was offered a scholarship from a College in AZ.  With that being said, we decided the best way to get him to AZ was to fly.  Please keep in mind that he has flown before several times, but he was much younger.

So the journey begins with; both legs of the trip, KB and I were upgraded to first class.  Good thing because, I really don’t think he would have made it in economy! Let me add that his girlfriend and my daughter (it was her first time flying) came along on trip.  They weren’t upgraded, so I decided that I would go visit with them throughout the flights, just to check on Tootlebug.

The weather wasn’t that favorable leaving out of our home airport so of course being with a non-experienced traveler, it was a little comic relief.  KB asked “will we have to fly through the lightening and the heavy rain?” I replied, “Yes just to get above the weather.”  Just then the captain made an announcement that all planes have been grounded.  He was able to exhale and was able to gather his nerves a bit. We sat on the tarmac for an hour before we get clearance for takeoff.

Once we were cleared for takeoff, I swear he held his breath until we were up in the air; breathe boy! The plane made a slight right and he almost went with the plane.  Mind you he swore he was going to be okay. He said, “Mom, oh I got this!!” Yea yea, you got this, alright, haha! We were mid way to getting to a cruising altitude, when he said, “Can he (the captain) stop going so high and turning the plane?”  His eyes were so big; I thought they were going to pop out of his sockets.  I was worried about Tootlebug, recall this is her very first time flying, not thinking I was going to have to hold the hand of a nineteen year old and he would need more of my attention! 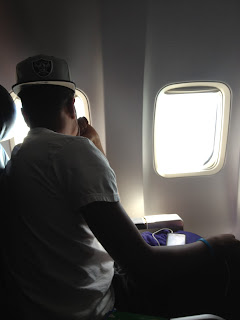 When we finally got to a cruising altitude, he asked to switch seats so he could look out of the window.  I did ask him if he wanted the window seat when we got on the plane and he said no. I guess he was too afraid in the beginning.  Every bump, he would clench up his fist and get nervous.  He didn’t calm down until he noticed the seatbelt sign wasn't illuminated any more.  Of course, that is when I stopped laughing too!

Remember I said that I was going to go and check on the girls throughout the trip?  Well I did (after asking KB will he be alright) and Tootlebug was having a ball.  Wow, she was doing much better than her big brother. Go figure!   She was coloring in her coloring book and eating her snacks. He was a little upset that she wasn’t offered any drinks while the plane was revoked for took off.  I talked with her for a moment, but I couldn’t leave “Nervous Nelly” along too long. 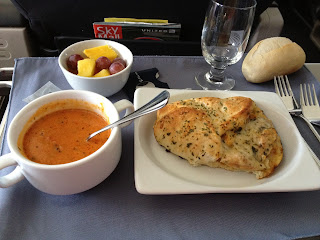 I returned back to seat around the time the flight attendant brought out the hot towels. KB asked what the towels are for. I told him they are used to clean your hands and your tables. The attendant brought his food and he was in amazement about the food selection.  All he had known was peanuts and/or cold sandwiches.  Then, the attendant walked around offering wine with the dinner and he raised his glass to ask for some, NOT!!! The attendant just laughed!  When the hot cookie arrived, he couldn’t contain himself! 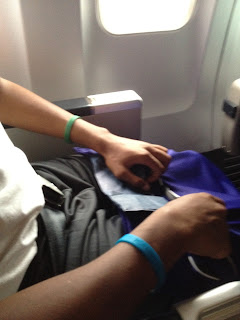 When the plane started to descend, there he went with clenching of the seat again.  I had to remind the boy to breathe!!  He said that he was feeling nauseous and he was turning a little green. Right then I gave him the “vomit bag” and told him, “Please use the bag!”  He held on to that bag until we landed.  He was so relieved that we were on the ground that he said, “I will have to kiss the ground.”  My poor child!  I then asked him, “I guess every time you will want to come home for a visit; I will have to come meet you to fly back?” Have mercy!!!

I teased him a few days, because he was bragging about how he had flown before and that he had that!  Even today, I am still chuckling! A word from the wise, take your kids on a trip that requires flying!  You never know when they will have to fly!
Posted by Jeigh at 11:06 AM