When an Ex-Boyfriend Calls

My ex-boyfriend called me recently and wanted to catch up.  We remained friends and he checks in on me from time to time.  The conversation started off as usual, how are the kids? How am I doing?  How's the family and what have I been up to?  And of course, he asked that nosy question “am I dating anyone”.  When I said that I wasn’t dating anyone, that’s when the chat became a bit unusual.

He shifted the conversation towards he and I possibly getting something started again, OMG, really?  That shocked me! We broke up over four years ago and we both have moved forth. As well as (not to put him on blast) the Dude is in a relationship with someone, can I say CHEATER!!   We ended our relationship because he was seeing someone else while we were together.  Mercy, this was one of the relationships that made me want to regroup and think about being in another relationship.  I discussed it in “Why Am I Single”. 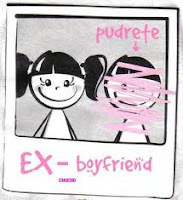 Well anyway, he wants me to accept the fact that he is with someone and be willing to be the other person, NOT!  Dude, really! Just because I am single, that doesn’t mean that I am lonely or desperate!   I have too much RESPECT for myself and REFUSE to be the OTHER WOMAN!  I said, “How dare you ask me something like that”.  Continued with, “in the number of years I have known you this is the second time you have offended and disrespected me”.   I also told him that if he honestly wanted to be with me, he would have to do the necessary things to be with me. Meaning, he will have to 1) rebuild the trust that has been lost 2) bring 100% of him to the table and 3) a marriage proposal.  Not that any of this will happen or that I was giving him an ultimatum, but he needed to understand that I am NOT going to be taken for granted EVER again by him or anyone else.  Obviously, the conversation ended with him getting upset because he isn’t getting what he wanted, aww poor baby, you will get over it!

It is so funny how people realize what they had when you’re gone and they can’t have you back.  How can I trust him after he cheated on me and want me to do the same to his current victim?? He needs to read, "Considering Recycling An Ex"!!  I am a strong believer that repeating the past is doomed for disaster.