Typically people recycle clothes, shoes and plastic, why would anyone consider recycling a boyfriend? 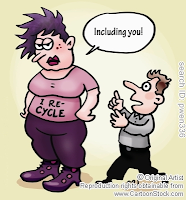 First, I think one must determine the reason they decided to throw in the towel. Are they recycling the ex because they know their quirks, they were good looking, had a great job, had the assets, they were the one they dreamed of being married to and having those three kids?


If they were unfaithful or lied enough to make them suspicious that they were having an affair, it probably is not a good indication of things to come if a person chose to recycle. There is a strong possibility that they may assume all is forgiven! Beware!!!

Never consider recycling an ex if they hurt you; physically or emotionally. Think about it, if they told you that you were ugly, stupid, and unattractive or just being down right mean to you, why should they be a factor at all? That is really not a hard question! Physical and verbal abuse should ALWAYS be left in the past!

I do know people tend to recycle because they are single, desperate or lonely. PEOPLE, you have to find things to do! Open up space in your social calendar. As I have said before, stop dating your sofa and get out and date!! Also, resist that pressure coming from family and friends who are rooting for the ex. I’m not saying all second chances are bad but you BETTER dig deep in your heart and consider if it is worth your time and effort!!


REMEMBER exes are exes for a reason!! It didn't work the first time, why are you considering recycling an ex?
Posted by Jeigh at 2:27 PM